All of us will keep this year in mind, for sure. However, despite all the effects on our lives after Covid-19 has decided to become a pandemic, the both of us have so many sweet memories of 2020 that we want to share our highlights with you.

To be honest it was quite a challenge to select which images, events or activities have been among the most important for us.

Nonetheless, we will present 12 selected highlights of 2020 to you:

By the end of the month we guided a photo tour in Iceland – fun fact: there were hardly any people around. Quite strange for such a popular winter destination you might ask?
Well, it was Covid’s first major appearance and all Asian tourists had to leave Iceland while we were there. Consequence? Iceland felt remote again…

A quite active month for us!
We were in the final stages of producing photo material for our upcoming book: lynx photo-trapping kept us busy, we tried to find river otters (which we successfully did in the end) and many hours were spent photographing Central European winter wildlife.

The last major overseas trip for this year!
We spent half of the month in our beloved Everglades. For years literally we wanted to kayak a few rivers in the northern Everglades which we finally managed in 2020. Absolutely stunning part of this world and as soon as Covid allows we might head back again…

Another month of intense photography work in Central Europe!
Lynx photo-trapping high up in the mountains has been one of our major projects, some of the results will be published in our upcoming book.
After so many years – in fact we have been working on lynxes since 2016 – we aimed at something special and more diverse. Our backlit lynx-idea yielded first successful results…although we admit, it is more side-lit…

Basically all of the month was spent filming for different TV productions. We’ve „chased“ baby foxes, badgers, beavers and black grouse all over Austria.

The Covid situation eased a bit and we were able to work on our wolf project.
However, in the end we weren’t successful with wolf sightings although we spent roughly 16 hours a day in the field! What a strenuous time it was!
During lunch break – by the way – Christine was also writing on another book project…more on that later…
Apart from waiting for wolves we further worked on other parts of our European wilderness project and filmed for TV documentaries. Especially the underwater footage by remotely triggered cameras of fish in Austrian rivers was one of our highlights.

This time we chose a publication among this month’s highlights. Our first TERRA MATER publication about Crowned eagles in South Africa was releases in mid-July. Yes!!

From May 2019 until October 2019 we filmed brown bears on assignment for Prospect TV (and ARTE/ZDF) all over Central Europe. In August 2020 the documentary was finally hitting TV and we were proud to be part of this project!

Another publication among our highlights.
A few years ago Christine joined an ambitious team of plant ecologists on their quest to find rare orchids in the vast swamps of Fakahatchee Strand Preserve in the northern Everglades. Christine was their field photographer and managed to get a cool set of images highlighting their strenuous effort to preserve orchids. The article was published in German magazine 33% – Das Waldmagazin.

FINALLY!
Remember, in June we spent hours and hours hiding in the forests for wolves without any success. By the way, we repeated the same procedure in August 2020 – with only 5 seconds of wolf sightings! So, we had to come back and in October the time was right!
In between other assignments we only had a couple of days available but these were sufficient. We were blessed with one of the most exciting and rewarding times of our life and some of the most memorable wolf sightings ever – just imagine a few individuals even approaching us up to a few meters!

2020 was the year of the European wildcat – especially for Christine. She was writing all year long on her upcoming book about Europe’s elusive „tigers“ and also started a photo project on them. Many phototraps were set-up over the summer months both in Austria and Slovenia and in November we recovered some of these cameras and were happily surprised by many outstanding wildcat images…by the way, we will share most of them in 2021 with you!

The last highlight of 2020 was the TV premiere of a documentary about bears in southern Austria („Der Karawankenbär – Auf den Spuren eines Grenzgängers“).
We were filming on assignment for DreiD.at (ORF/ARTE) over the course of a few months back in 2019 and in December the documentary was airing both on Austrian ORF and German/French ARTE. 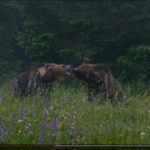 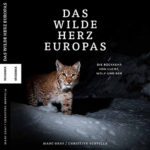